See how to choose the best smartphone for a vlogger and see why the Samsung Galaxy S21 Ultra 5G is currently one of the best candidates for this role.

So you want to create your vlog right? Where to start then? The first step should be to find out what we want to talk about, but I assume that this stage is already behind us. Now is the time to put together the hardware that can be the most overwhelming step for budding content creators. As it turns out, completely unnecessary. In fact, the only thing we need is a smartphone - especially if it offers such a rich set of video features as the Samsung Galaxy S21 Ultra 5G.

Let's start with the basics - what equipment does a vlogger really need? Certainly one that will be able to record high-quality video material. But of course this is not the only requirement. After all, when vlogging, we do not always have the comfort of recording in a well-equipped studio. Sometimes we would like to prepare material from a holiday trip, convention or simply from our kitchen. In such a situation, we quickly come to the conclusion that sometimes a perfect image is not always as important as handy dimensions and ease of use.

Smartphone for a vlogger - what should you pay attention to?

A good smartphone meets all these conditions. Let's take the issue of image quality to the workshop - Samsung Galaxy S21 Ultra 5G allows you to record even in 8K resolution at 24 fps. If we were looking for such parameters in a mirrorless camera ... well, good luck. Sure, there are such models on the market, but their prices are in the range of several thousand zlotys. The 8K itself can be useful, especially if we record in a home studio. Higher resolution gives us, above all, wider possibilities at the stage of material processing, allowing, for example, for its subsequent cropping and stabilization. It will also be useful in the future, when 8K will gain popularity - our viewers will be able to continue to enjoy great image quality, despite the fact that the material itself has been on the back of its neck for several years.

The smartphone will also be great in the field. There is a saying popular among photographers that the best camera is the one that we always have with us. When creating a vlog, we will quickly find out that it also remains true here. It is much easier to work with a small smartphone that fits into our pocket than with a large mirrorless camera with a set of lenses. In addition, such a smartphone is usually better able to stabilize the image, and we will be able to use the recorded material in social media immediately, without having to transfer it to a computer. It is a great convenience, and also saves time and space in the backpack. 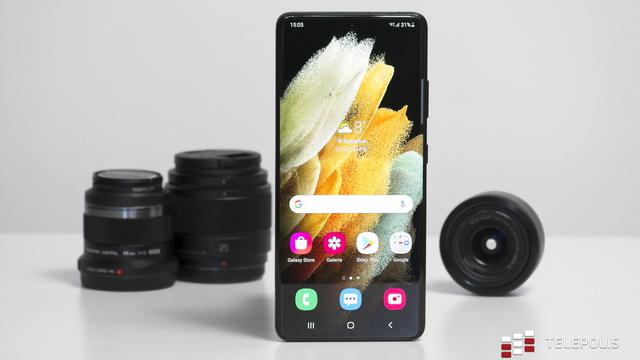 But of course a smartphone is unequal to a smartphone. If we are serious about running a vlog, it is worth choosing one that will make this task as easy as possible for us. Currently, there are few devices that will work as well in this role as the Samsung Galaxy S21 Ultra 5G. In its new flagship, the manufacturer put a lot of emphasis on video functions, thanks to which we can enjoy not only the high quality of recordings, but also a set of very useful functions that are not available from the competition.

First of all, with the Galaxy S21 Ultra 5G we can record video in 4K resolution using each of the four built-in cameras. This is important because when creating a vlog, we will often use the front camera, and this is usually limited only to Full HD. Considering the constantly growing popularity of 4K, sooner or later it would become a serious limitation for us, so it's better to choose a smartphone that will not pose such problems to us.

If we are going to record in the field, image stabilization becomes an important issue. We will get the best results by placing the smartphone on the gimbal, but this is not always possible. Oh, if only because we cannot always have it with us. In this situation, built-in image stabilization becomes critical. In the case of Samsung Galaxy S21 Ultra 5G, we can use it for each of the built-in cameras and for any resolution - even 8K. What's more, in the case of particularly demanding scenes, e.g. while running or cycling, we can use the High Stability function. It is true that we are then limited only to Full HD resolution, but we get results comparable to the use of a high-class gimbal.

As a rule, the downside of smartphones is that when recording video with them, we are usually limited to one focal length. Anyway, even if the smartphone allows you to record movies with the use of one of the additional cameras, e.g. ultra-wide-angle, switching between them during the recording itself is either impossible or results in an ugly transition to a frame with completely different colors, exposure and focus. Samsung has made a lot of effort to eliminate this problem in its flagship. During recording, we have access to each of the built-in cameras, and the only significant difference between the images recorded by them is the angle of view. Thanks to this, working with the phone is similar to using a real optical zoom.

Speaking of recording with all built-in cameras, the Samsung Galaxy S21 Ultra 5G has been equipped with one more useful feature - Director's View. With its help, we can simultaneously record using the front and one of the rear cameras, which we can switch between at any time. In the final material, the image from one of them is displayed as the main one, and the other appears in a smaller window. A useful thing, and although a similar effect is very easy to achieve in post-production, thanks to the Director's Perspective it is simpler and - above all - faster.

It's not just the picture that matters

Of course, the image is one thing, but the sound must not be forgotten. The audio quality has a huge impact on how our viewers will perceive the recorded material, so this issue should not be underestimated under any circumstances. Fortunately, the Samsung Galaxy S21 Ultra 5G has one of the best microphones on the market. Importantly, they work with the zoom function, thanks to which the smartphone seamlessly switches between recording sounds coming from different distances and directions. If, on the other hand, we would like to approach the matter more professionally, we can always connect an external microphone using a USB-C adapter. The smartphone will not only handle it without any problems, but in the professional mode it will also allow us to choose from which source we want to record the sound.

What to do with the recorded material? In most cases, it has to be assembled afterwards. It's best if we have a strong computer at hand, but sometimes it is useful to be able to fold a simple material directly in the field. Fortunately, we can use our smartphone for this purpose. Samsung Galaxy S21 Ultra 5G not only boasts sufficient performance for this purpose, which it owes the Exynos 2100 processor, but also has another ace up its sleeve. It is the support of the S Pen stylus, known from the Galaxy Note business series (stylus sold separately). It makes it easier to work with multimedia and makes even a small smartphone screen no longer a limitation.

As you can see, Samsung engineers have done a lot to make life easier for vloggers - both those who take their first steps and the more advanced. With a smartphone such as the Samsung Galaxy S21 Ultra 5G on hand, we do not have to worry about completing expensive equipment and a lot of technical stuff. All we need to do is know what we want to show and we will start by clicking the record button.