How to record the screen on Android and iOS smartphones?

We will start recording the screen in various ways, depending on the type and version of the system we use. The easiest and probably the best way is to download the dedicated application. But most smartphones already have their own recording software.

Most of us use additional applications to record the screen on Android smartphones. In newer devices, they are not required, which does not mean that they are not worth using. Among other things, they allow you to select the image quality, file name or saving path.

Smartphones with Android version above 7.0 have a built-in screen recording option. Not everyone can know about it, because this feature is very hidden. But there is a way to make it easier to access.

Android screen recording can be placed in the popup menu, the drop-down from the notification bar at the top of the screen. You can see how to do this in the pictures below. Once your screen recording hits the quick taskbar, it only takes a few seconds to launch the function.

We expand the popup menu and edit what we want to find in it. 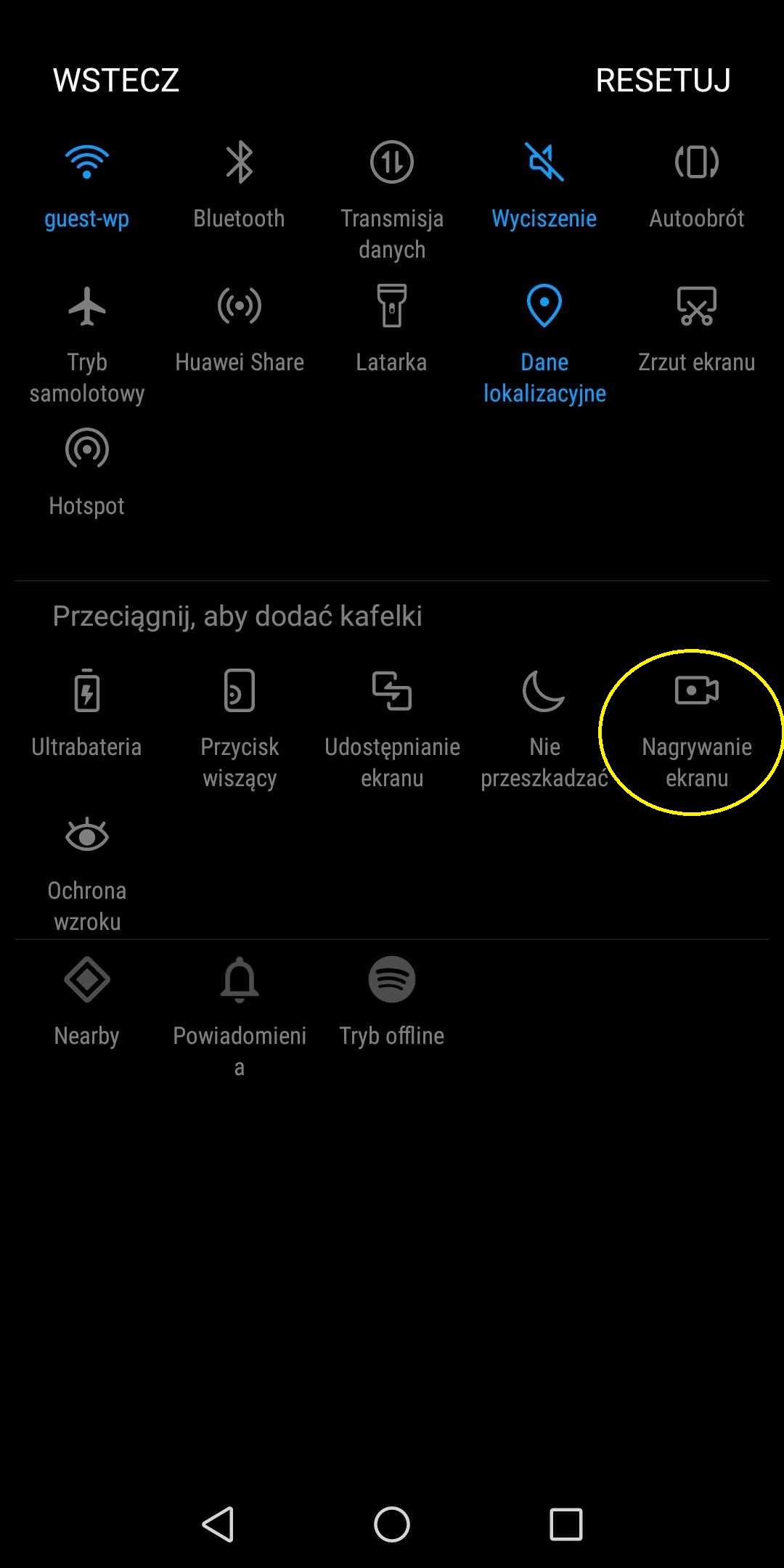 Then look for a tile with the words "Screen recording" and move it up, to one of the free slots.

And this is what it should look like after adding it. If that's the case, we can close the editor now.

Some of the Huawei devices, including the popular P10 and the latest hit P20, use gesture control. A few of them are especially worth paying attention to, e.g. dividing the screen in half, allowing you to use two applications at the same time.

One of the gestures also allows you to start screen recording. It is enough to lightly hit the display with two knuckles. The phone will first ask for permission to record, and then ask you to choose the device from which to record the sound.

There are several smartphone applications worth recommending. One of them is AZ Screen Recorder, recommended by many Internet users. In the Google Play Store, it already has over 10 million downloads and a rating of 4.6.

The main advantage of AZ Screen Recorder is simple operation. First of all, the application is displayed above the others, by default on the left side of the screen, which makes it easier to use. In the settings, we can choose the resolution, number of frames per second, recording orientation, etc.

Another popular application is Mobizen. It is recommended by the Google Play Store itself and has been downloaded over 50 million times. Its producers claim that it is the number one application in the world, of course in its category. But that doesn't mean it's worth using.

The way Mobizen works is very similar to the previous app presented. It also "hovers" on the side of the screen, and unfolds a short menu from which we can go to settings. We have a bit more options here than with the previous app. Mobizen gives us, among other things, the possibility of changing the countdown time before starting the recording.

However, Mobizen seems to me more complicated and advanced than AZ Screen Recorder. If I were to use one of these two, it definitely wouldn't be Mobizen. It also displays many incomprehensible notifications. There are many other applications that allow you to record the screen, such as DU Recorder, EZ Screen Recorder or REC.

In iOS versions 11 and above, recording your screen has become a breeze. Actually, it resembles the option that I wrote about with Android 7.0. It's in the same place - coming out of the popup menu that pulls out from the top of the screen. But first, analogous to Android, we have to put it there.

To add a function to the popup menu in iOS 11 we have to go to the settings. Then look for "Control Center" -> "Tool Customization" -> find "Screen recording" and press the "+" sign next to it. From that moment on, the function goes to the popup menu.

Do you have a news, photo or video? Send us via czassie.wp.pl

Rate the quality of our article: Your feedback allows us to create better content.

Stay with us on a regular basis