Huawei, Honor and Homeland, or a Chinese case one year after the Trump ban

You have made my house empty for me, my dear Google, with your disappearance! So echoes of Trumpo-spy riddle and the further fate of Huaweia and Honor. A year ago, Donald Trump broke our phones ...

At the end of April, another model joined the moto g family, the moto g20. The Motorola moto g20 4/64 GB is available in the colors Flamingo Pink and Breeze Blue. Interestingly, it also received a very exotic processor, namely the 8-core UNISOC T700 CPU with 2xA75 + 6xA55 1.8 GHz with the G52 850 MHz GPU. Its recommended retail price is PLN 699. So it is one of the cheaper models in the family (you can also buy a moto g10 for a similar price). How is it in everyday use? Feel free to review.

The design of the Motorola moto g20 fits in with the entire series. On the back there are plastic backs in 2 colors: Flamingo Pink and Breeze Blue. I got the blue version with a delicate brocade sheen. The advantage of this finish is that it leaves no fingerprints on it. I also think that this version will be more to the liking of the female part of users. I personally like it. Due to the fact that the housing is made of plastic, which makes them more susceptible to scratches, and the cameras protrude slightly, the smartphone will quickly land in the case. On the plus side, the manufacturer has also thought about this element and in the package we will find transparent backs.

In the upper left corner you will find a standard island with cameras, and below it in the middle - a fingerprint reader hidden in a circular recess under the letter M. The reader itself works fast enough and flawlessly. For at least 2 weeks of testing, I had no problems with it.

In addition to the reader, we can use the face recognition option to unlock the phone. Maybe it is not a speed demon (in darker places it does not always work), and it is not the safest method, it still exists and can be used. I was unable to unlock the phone with a photo, but personally, I do not recommend securing my data in such a way.

I would like to add that the manufacturer also declares that the housing is resistant to moisture. It uses a hybrid IP52 class coating, which provides a barrier to protect against moderate exposure to water, such as accidental spills, splashes or light rain. It does not mean that we can submerge the phone in water or expose it to water or other pressurized liquids. Keep this in mind as the smartphone is not waterproof.

The tested model is quite large, which will not surprise anyone anymore. Compact smartphones are still a rarity, unfortunately. Its dimensions are: 165.22 x 75.73 x 9.14 mm, and the weight is 200 g. Therefore, one-handed operation will not be the most comfortable. Despite this, the smartphone fits quite well in the hand, and almost all buttons are within reach. Almost, because recently in the moto g series, and thus also in the g20, there is an additional Google Assistant button above the volume buttons on the right edge. To get to it, we have to move our hand slightly upwards. It is not very convenient. It might not be like that, by the way.

On the housing we find: 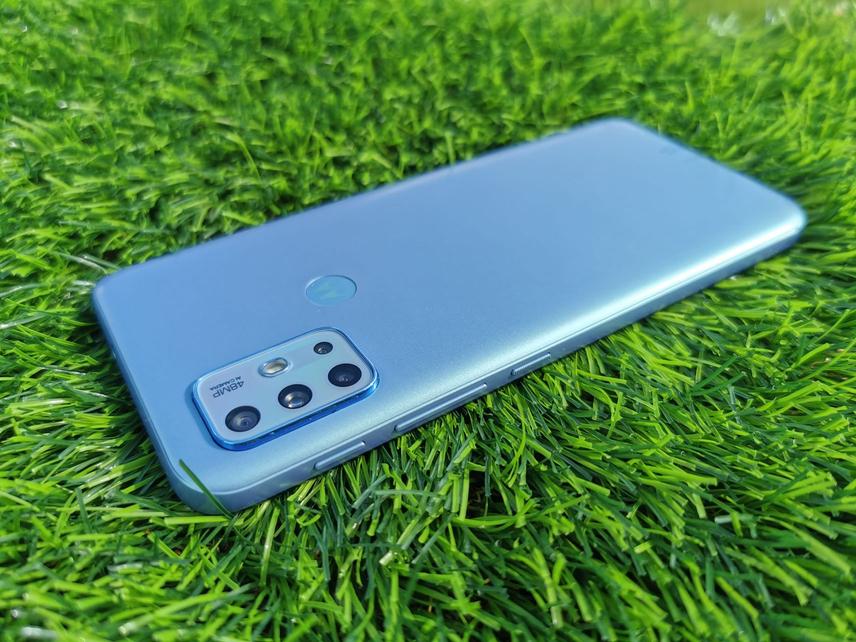 As for the talks, I have nothing to complain about here. My interlocutors heard me well. I do them too. I also did not notice that the phone loses coverage in places where it should not.

What about the sound? It is a smartphone for about PLN 700, so it's rather hard to expect music worthy of a music lover's ears, but still there is no reason to complain. The mono speaker works properly and is loud enough. The music flowing from it is rather flat, but it is sufficient for everyday use. When we want a slightly better hearing experience, we can switch to headphones. On the upper frame you will find a dedicated 3.5mm mini jack output.

The Motorola Moto G20, like the moto g30, was equipped with a 6.5-inch Max Vision display with HD + (1600 × 720) resolution (269 ppi, aspect ratio: 20:09). The screen is made in IPS TFT LCD technology. We find here small frames on the sides and top and quite a wide chin. The front camera was placed in a small teardrop in the center of the upper frame. In sum, the active area-touch panel (AA-TP) occupies 87% of the entire front. The image itself looks pretty good in its price range - the screen is easy to read. In addition, in the options, we can also adjust the contrast (automatic, higher, standard) and colors (standard, warm, cool) to your needs. The only thing you can complain about here is the average viewing angles or the comfort of use in the sun (I recommend moving to the shade). But many people will be pleased that we can also turn on the dark mode and most importantly the screen supports 90Hz refreshing (smoother animation, better responsiveness).

I would like to add that the smartphone does not have a notification LED or AoD, but we will find Moto gestures that are already known and liked by many (e.g. a 3-finger screenshot). The phone also provides users with useful Android functions, such as the Google Assistant (also under a dedicated button) and a function for responsible use of the device - Digital balance or parental controls.

What some users will probably wonder about is the mysterious-sounding name of the processor - UNISOC T700 CPU. Yes, for some it may be something exotic. Unfortunately, I also did not manage to perform full benchmarks, because, for example, AnTuTu showed 0 in the GPU section. Nevertheless, in everyday use, the smartphone was as correct as possible in this price range. Maybe it's not a speed demon and sometimes the animation slowed down, but when we don't overload the memory (we have 4 GB here), we shouldn't have any major problems. I would recommend this model more to someone who uses the phone more for calling, texting or the occasional look at social media. Small games should also start without a problem, but the more demanding ones should not. I also did not notice that the smartphone was overheating somehow. At least for everyday use.

Motorola Moto G20, works under the control of the pure edition of Android version 11, which I do not have to present. The last security update was on: March 5, 2021. The system optimization is correct, thanks to which the phone works smoothly and stably for this price range.

As standard, I will add that the tested smartphone is of course equipped with such technologies as:

Wi-Fi connectivity Bluetooth® 5.0 worked perfectly well. I also had no problem with the GPS receiver, which I used mainly when wandering around the city (Warsaw, Krakow). And good news - we will find NFC here, and this will probably please many potential users.

Motorola Moto G20 received a 5000 mAh battery, which, combined with good optimization of pure Android, allows you to calmly for 2-3 days of moderate (several calls, text messages, occasional look at social media, several photos) of use on a single charge. With a more hardcore user, the phone should be enough for a whole day of work. Charging in it is only 10 W, so it is best to connect the smartphone to the charger overnight. The moto g20 does not have inductive charging.

And last but not least, the camera and the camera. In Motorola Moto 20 we can find:

As for the photo functions in the camera application, we find here the following functions:

So many of the parameters, and what does it look like in reality?

I have to admit that low-end smartphones (below PLN 1000) are getting better at dealing with mobile photography. Yes, they will not be great colors, perfect detail, but in everyday use they have no reason to be ashamed. This is also the case with the moto g20. Daytime photos in fine weather from this phone are very pleasing to the eye, although sometimes with slightly muted colors. The tonal range could also be a bit wider. Detail and quality diminishes when the weather breaks or the evening dusk sets in. Noise and blur also begin to appear in such frames. You cannot complain about the wide angle, although you can clearly see the changed colors compared to the main lens - they are slightly warmer. The detail is also falling. When it comes to night photos, we have a night mode here, which will allow you to get quite nice night shots. In less lit places, unfortunately, noise and blurring appear, but remember that it is not an expensive smartphone, so we can turn a blind eye to such shortcomings. We also have a macro lens at our disposal, but unfortunately it is only 2 Mpx again. Surprisingly, however, these photos are pretty good, although small. Unfortunately, we will not find a tele module here. We only have digital zoom, which ceases to make any sense above x2.

Here are some examples:

Video recording is possible in the resolution:

Motorola Moto G20 is a bit of a moto g10, but with a different processor and, above all, a pure android. The smartphone allows for quite smooth operation, and the battery lasts up to 2-3 days with occasional use. We can also take good souvenir photos with it, e.g. from a weekend trip and save them on an additional memory card (exchange with SIM 2). There is also a 3.5 mm mini jack output and payment support - NFC. For people who are looking for an inexpensive and at the same time quite decent smartphone with pure Android, the moto g20 will be perfect.

In summary, the following can be included in the plus: