Samsung Galaxy Z Fold 3 after two months. The original excitement did not pass even for a moment.

The Samsung Galaxy Z Fold 3 is not as good a smartphone as the iPhone 13 Pro. He has a much worse working time, worse cameras, he has a software error and - this is the main reason why I did not buy either Fold 3 or Flip 3 - Android Auto does not work for me, neither in tandem with my own car, nor in pairs with others cars. If you're looking for peace of mind, this is the wrong address.

But as usual, Android's minor irritations quickly turn into a big headache, in the case of the Galaxy Z Fold 3, after more than two months, they do not matter much to me. Because Samsung Galaxy Z Fold 3 has completely changed the way I use the phone. And although the "initial crush" phase is long behind me, I reach for it every day with the same enthusiasm, and my iPhone 13 Pro collects dust most of the time.

Samsung Galaxy Z Fold 3 after two months. The original excitement did not pass even for a moment.

I have been testing smartphones for almost 7 years and I know perfectly well that after the initial excitement phase there is usually a boredom stage. Even the best product becomes commonplace, even in the most refined equipment, defects that could not be seen in the first weeks begin to appear.

Meanwhile, the Samsung Galaxy Z Fold 3, instead of liking less and less, with time I started to like more and more. Perhaps in part because I finally got into the habit of using this freak. I don't have to think about unfolding the screen anymore, but I do it unknowingly. I don't wonder how to use the preview screen when taking a photo, just do it. I'm not looking for which way to turn the screen to have the stereo speakers on the right sides, I just play a YouTube video and watch it.

However, while usually such a "habit" would make the smartphone normal for me, here the stage of the original excitement never passed. This is perhaps largely due to the way I use my phone, and I do it primarily to watch videos, read articles and books, and check social media and communicate with friends or colleagues. And in each of these applications, the Z Fold 3 is simply great.

I still can't get over how much the Samsung Galaxy Z Fold 3 is for someone as hopelessly addicted to YouTube as me. Being able to watch movies either on the big screen or on half of it and use the phone as a stand is the gamechanger of my mornings. Usually, after a walk with my dog, I drink my first coffee at the kitchen table and I always use this time to gradually "warm up" before work - so I read and watch for entertainment, not for professional purposes, and here the large display works perfectly. It made me love reading manga for the first time, which so far was extremely uncomfortable on small smartphone screens or too large computer screens. The size and aspect ratio of the Samsung folding display is perfectly suited to this application, as well as watching streams on Twitch. 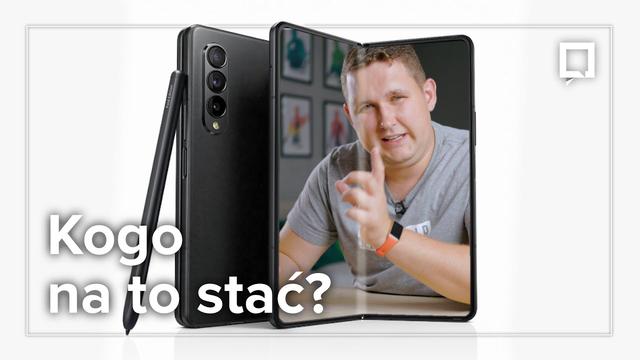 Someone will say that you had to buy an iPad. It's true, the problem is that I will not fold the iPad in half and take it with me. And the convenience of Z Fold 3 comes in handy at every step. As a photographer, I show photos to clients very often - so far I did it on a computer that I had to carry with me to meetings, and now? Now I unfold Folda 3 (which in itself adds +100 to the prestige, seriously) and show the photos on a beautiful, touch screen. And again - the iPad would do the same and maybe it would do better, but I would have to carry it with me and always remember it. ZZ Foldem 3 I do not have such a problem, because it is my phone. One does not forget about the phone.

Over the course of two months - apart from the aforementioned Android Auto - there were also no new irritations. On the contrary, as I am used to, for example, a split keyboard layout or a narrow external display, some irritation has ceased to exist. Ok, I would like the Galaxy Z Fold 3 to have a better camera, at least as good as the Galaxy S21, but I also don't take photos with my smartphone so often that it becomes an unmistakable problem.

My biggest concern, when I was taking the Z Fold 3 for testing, was the durability of the device, or its potential lack. I even asked Samsung to send a case, because I was afraid that this phone would end up miserably in my clumsy hands. It turned out, however, that I was completely unjustly afraid. I have been wearing the phone for two months completely "bare" and the only trace of wear I can see on it are a few scratches on the protective foil of the external display. That's all.

However, the hinge impressed me the most. I remember that when I tested the Galaxy Z Flip 5G for several months, the hinge came loose quite quickly and at times it made squeaky noises. However, I did not experience similar behavior in the Galaxy Z Flip 3 and I did not experience it in the Galaxy Z Fold 3. I will say more - despite several dozen unfolds a day, the hinge works as stable as on the first day. You can't hear or creak. And yet more than once I put it in the pockets of "dog pants", the pockets of which I regularly shake particles of sand.

The occasional use in the rain did not hurt Fold 3 either. I often take out my phone and either reply to a message or record a voicemail, and since I go out with my dog ​​in any weather, I often do it in rainy weather. So far, however, not a single drop of water has penetrated into the Z Folda 3 and the smartphone works flawlessly.

I was a bit afraid of the recent frosts, because using the "folding pad" at minus temperatures was a completely new experience for me. Again, however, my fears were completely unfounded. The Galaxy Z Fold 3 worked without any problems, even when the thermometer showed -7 degrees Celsius.

Still not sure if I would take it to the beach; probably not, because larger amounts of sand could harm the folding structure much more than the particles in the pocket. Nevertheless, the Samsung Galaxy Z Fold 3 can withstand much more than I initially thought.

Looking back - would I buy a Galaxy Z Fold 3 instead of an iPhone 13 Pro?

Let's assume for a moment that the price does not matter, and the Galaxy Z Fold 3 does not cost nearly half as much as I spent on an Apple smartphone. Even if you can afford such a purchase, it is hardly rational; spending nearly PLN 9,000 on a phone, even as innovative as the Samsung folding box, is nothing more than a whim.

And yet, from the perspective of two months, I can see that I would be willing to accept such a whim. Samsung Galaxy Z Fold 3, like the Z Flip 3 before, completely changed my optics of looking at smartphones. So much so that all other smartphones are dead to me. When I pick up my regular flat Android phone, I get bored. When I pick up the folder, I feel almost childlike excitement from playing with a cool gadget.

If it were not for the Android Auto system that disconnects at random moments, I would without hesitation get rid of the Apple smartphone and replace it with a foldable Samsung. Until recently, I would have said the Z Flip 3 would be my first choice, but after two months with Fold 3, I'm starting to change my mind. The Flip 3 is without a doubt more convenient and accessible in everyday use. With Fold 3, however, it offers so many possibilities that the minor inconvenience in the form of its unusual dimensions ceases to matter. I do not know how much time I have left to play with the folded Samsung, but I know one thing now - I will be very sorry when the day comes when I remove my account from it and pack it into a box.