Summary of the announcements from Ignite 2021 and more! It's been a week with Microsoft 193

Hello, dear readers! In this episode It's been a week with Microsoft, we'll take a look at some announcements from the second part of the Microsoft Ignite 2021 conference this week. We will enter the world of metaverse, artificial intelligence and a hybrid approach to cooperation, among others. We also check news in Teams, Microsoft 365 and at the interface between Android and Windows. We also have an important announcement for OneDrive users on older systems. We invite you to read and watch!

We are entering the world of metaverse - Mesh in Microsoft Teams

The Metaverse that Facebook Meta recently talked about is still just a rough concept, but it's nothing new. Futuristic visions of meetings in a virtual environment have been presented for years, and Microsoft is also known for experiments in this field, especially with the use of VR techniques. Another approach to this topic is the Mesh platform for Microsoft Teams, presented at Ignite 2021.

Mesh for Microsoft Teams introduces a new generation of 2D and 3D meetings. The platform will give you control over avatar personalization and will allow you to use AI to imitate movements and gestures to transfer your physical presence into the conversation, even when the camera is turned off. Organizations will also be able to create immersive spaces that mimic physical spaces such as conference rooms and design centers.

Context IQ is a new solution in Microsoft 365 that turns insight into action by using data from Microsoft Graph to predict, search and suggest the information you need, exactly when you need it - at the point of action.

The Microsoft Editor is the first experience transformed by Context IQ, helping with things like suggesting relevant files or documents, searching for available calendar dates, suggesting collaborators to tag in emails, or suggesting related Loop components for Dynamics 365 records. Probably in the future this one the collection of AI experiences will also go to other applications of the suite.

Microsoft Loop is a new application in the Microsoft 365 portfolio that combines powerful and flexible canvases with portable components that flow freely and stay in sync between applications. This allows you to think, plan and create together. 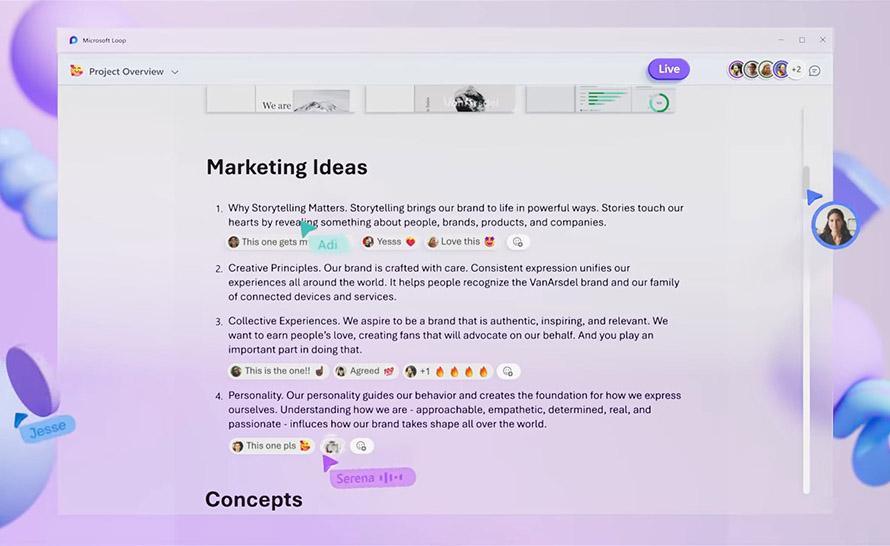 Microsoft Loop is made up of three components: components, pages, and workspaces. It is the next step in the evolution of Microsoft Fluid Framewok - the new way of working with Office documents announced in 2019, about which we have already written several times. Microsoft Loop components will start rolling out this month to Microsoft 365 apps such as Teams, Outlook, and OneNote. We should expect further announcements in the coming months.

Copy-paste between Android and Windows available in the SwiftKey app

Copying and pasting (text and images) between Android and Windows 10 was already possible in early 2020 thanks to the Your Phone app, and the next option was the cloud clipboard, which was already loud in 2018, but which went to SwiftKey Beta for Android only a few months ago.

Now, with the new stable update 7.9.0.5, the application allows you to copy text from an Android phone or tablet and paste it on a Windows PC (and vice versa). The feature works on both Windows 10 (October 2018 Update or later) and Windows 11.

Easily turn the microphone on and off right from the taskbar

When a Teams meeting is in progress and there is a lot of information on the screen, it can be difficult and stressful for beginners to locate the microphone icon. Therefore, it is a good solution to put this icon on the taskbar, from where it is always easy to locate it. Such a novelty was served by Microsoft to Insiders in Windows 11 (build 22494) in the Dev Channel.

Only when we join the meeting, the icon will appear on the taskbar immediately and will remain there until the end of the conversation. No matter how many windows you have open, the microphone icon will always be there. The feature began to be shared with some Insiders with school and work accounts, so not everyone will be available right away. Of course, support for Chat with Microsoft Teams (Teams for home users) is also planned.

Moreover, other instant messaging applications can also take advantage of this feature in Windows 11. The mute and unmute capability only applies to the current connection.

Have you heard of the Emojigate? It seems that all is not lost. The work of graphic designers was not wasted and 3D emojis found their place in Office applications, starting with Teams and Microsoft Loop.

Until now, Teams has allowed you to react to posts / messages with 6 basic emojis. Now the range of possible reactions has widened considerably! To help express yourself more authentically, you can add reactions to your message from over 800 new 3D emojis, Microsoft wrote on a blog. In other words, the three-dimensional emojis have not been lost anywhere and are not a mistake, as previously awkwardly suggested.

In August, Microsoft began rolling out the Visio web application to Microsoft 365 commercial subscribers. Since then, corporate M365 or O365 users can take advantage of the key features of the diagram editor at no additional charge. This week, the giant announced the worldwide release of Visio in Microsoft 365.

OneDrive will stop working on Windows 7, 8 and 8.1

Microsoft has announced the end of support for the OneDrive desktop application in Windows 7, Windows 8 and Windows 8.1. First, program updates will cease to be delivered (from January 1, 2022), and then file synchronization will be turned off (as of March 1, 2022).

To avoid disruptions, Microsoft recommends upgrading the operating system to Windows 10 or Windows 11. For computers that do not meet the Tens or Eleven system requirements, you can back up your files by manually uploading them to the OneDrive web app in your browser.