Test: Huawei Matebook 14 has (almost) everything you need for work and entertainment

Home ›Test: Huawei Matebook 14 has (almost) everything you need for work and entertainment21.07.2021 15:19Konstanty Młynarczyk

Well made, efficient, with a very good screen and for reasonable money.However, it has features that will make not everyone like.

Huawei's idea for notebooks is bright.There should be at least one computer of this company in each price and utility category, offering at least as much as competitors in an attractive price for a given category.The Chinese giant does not play with attempts to surprise customers with a new look or some unusual functions - instead, it regularly releases subsequent versions of its devices equipped with a new generation of processors and minor improvements.Is this a good tactic?

Summary Huawei Matebook 14 is a very attractive notebook for work - or, in fact, everything - except for advanced games.Small enough to take it with you everywhere, sufficiently efficient, to deal with most tasks, with a sufficiently large screen, so that working on it is comfortable.Let's add a very good price for this shelf and configuration and we have a real hit, whose only problems are a lot of weight and a strangely placed camera.

Who do we recommend?

If you are looking for an efficient notebook with a 3: 2 screen, Matebook 14 will be one of the best options for you.Cheaper, more efficient and better equipped than a Surface Microsoft laptop, offers a great combination of possibilities and a reasonable price.

Who do we not recommend?

This is certainly not a computer for people working remotely from travel: from the perspective of the Matebook 14 webcam, everyone looks bad and that's it.People for whom the notebook is a movie for watching movies may also be dissatisfied.The Huawei laptop screen has a large working surface and great quality, but the proportions are strongly different from cinema.

Matebook 14 is slightly over 30 cm, depth 22 cm and a thickness of 15.9 mm.Thanks to the very narrow screen frames, it is characterized by an excellent ratio of the display surface to the total surface, and thanks to the use of a matrix with 3: 2 sides proportions, the whole is very shapely and compact.

The weight is worse - weighing 1.49 kg (let's be honest, it's just one and a half kilograms!) It ranks in the upper states.If someone is ready to carry a notebook with this mass, they can be tempted by the Microsoft Surface Laptop 15 with a long diagonal screen.There will also be lighter computers with a matebook -like display sizes.

A specific mass of Matebook 14 adds its three grosze to the sense of solidity that we have when taking this computer in our hand.Mostly made of matte aluminum, the Huawei notebook is perfectly stiff, and the plastic hinge works precisely, allowing you to set the screen in the desired position without any rocking. 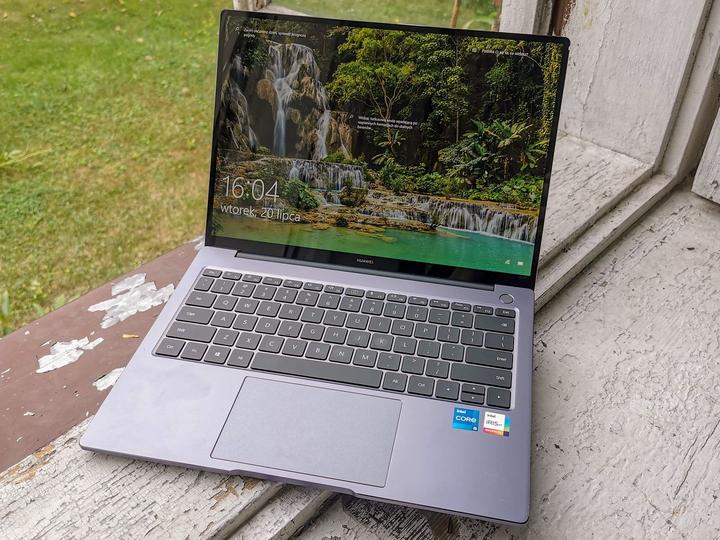 Appearance?Whoever saw one Matebooks of the 13/14 or X/X Pro series, this one saw them all.Model 14 2021 is noticeably thicker than Notebooks of the X line, but at first glance you can see not so much a family similarity, but rather the fact that these are delicate variations on the same project.

Because beauty, as you know, is in the eye of the viewer and is an emotion rather than observation, everyone will have their own opinion about the appearance of Matebooks.I like their gray minimalism, but I think that it is a good idea to maintain a coherent "project language" in the entire computer portfolio.

The element that defines Matebook 14 from a utility point of view is its display.As I have already mentioned, the unusual proportions of the sides 3: 2 determine the shape of the whole computer, and very narrow frames at the top and sides of the matrix allow you to keep the dimensions of the device within very reasonable limits.At the same time, a 3: 2 display with a diagonal of 14 "provides a much larger utility area than panoramic screens 13.3" popular in this class of notebooks.

The IPS matrix used (in the Matebook I tested it was TV140WTM-NH0) is characterized by a 100% sRGB color space and 70% of Adobe RGB space and a decent maximum brightness slightly below 400 rivets.The display provides a very good contrast (exceeding in the specifications 1: 1500) and also viewing angles.

The resolution 2160x1440, although lower than in the "flagship" Notebooks of the X Pro series, is absolutely enough to provide a perfectly sharp image at the same time size size.

The screen is equipped with a multitouch touch panel recognizing ten contact points, which is responsive and sensitive - using it is a pleasure.The consequence of using a touch panel is a glass screen, which obviously increases the reflectors.When working or taking entertainment outside, you need to increase the brightness of the backlight to the maximum.

These are the strengths of this computer.An island keyboard with an identical system as in other matebooks of this family is perfect for quick and long writing.The keys are a bit harder, with a short jump, offer a clear, slightly reflecting click and work precisely and confidently.The size and keyboard layout suits me, but I have to complain about the lack of separate buttons for quick navigation in the text: Pageup/Pagedown and Home/End.The absence of especially the latter hinders work with larger documents or spreadsheets.

The keyboard has two backlight degrees (plus the possibility of turning it off), on the F7 key, adding for turning on/off the microphone, a diode is burning that the microphone is turned off - when working in darkness it can be annoying.

The touchpad has dimensions of 12x7 cm and has a matte surface with a good, though not great slip.It works precisely, both when it comes to controlling the cursor and gesture support.The mechanism of buttons hidden under the tile is also without complaint.

Matebook 14 is different from his cousins from the higher line X/X Pro, that he has...more ports.It has been equipped with two USB sockets that support standard 3.2 of the first generation and USB-C socket in accordance with the Power Delivery and Display Port standard.Added to this is HDMI 1.4B and audio socket 3.5 mm.This is a pretty good "consumer" set of ports that will work well in most applications.

People photographing more than a smartphone may lack a memory card nest, and those who would like to use a matebook in the company will confidently miss the Ethernet connector, but the real "great absent" is herebolt here.

Narrow screen frames make it difficult or impossible to place a webcam module in them.Huawei already at the first Matebook of the X series found a solution that it uses consistently in subsequent models: the retractable camera was hidden on the keyboard, between the F6 and F7 buttons.Unfortunately, although this is an ingenious and interesting solution, you can definitely not call it good.During all video circuits, the Matebook user is visible at a very unfavorable and unnatural angle, from a frog.It also happens that the camera's field of view there are taping fingers.

The capacitive fingerprint reader built into the power button is a great facilitation.It allows you to quickly and safely log in to the system without entering the password.Just touch your finger while starting the computer.

As you can see, we are dealing with an efficient machine for comprehensive home and office use - but not to play.This is confirmed by the results of synthetic tests in which Matebook 14 reached 4523 points in PC Mark 10 and 3211 points in 3D Mark Firestrike, as well as tests in real applications in which the Huawei notebook showed great possibilities working smoothly with several dozen open EDGE browser cards, applicationsOffice Outlook and One Note, running Spotify and permanent communication via Slack, MS Teams and Messenger.

A very big advantage is effective passive cooling, thanks to which the matebook remains absolutely noiseless even with quite intensive office work.Only the launch of the test software, games or other harder burdening tasks caused the windmills to be launched.These, in turn, turned out to be rather troublesome, even at relatively low speed, emitting quite high, and thus penetrating noise.Fortunately, cases of launching active cooling in real, daily applications were really sporadic.