I've seen the real HarmonyOS. A button, not a system, but that's very good

What is HarmonyOS? To say it is Huawei's new operating system is an imprecise answer. Yes, it's a family of software, but HarmonyOS is an experience, not an Android replacement.

When Huawei announced it would create its own operating system, it caused a lot of confusion. The announcements were unclear, many people expected mobile willow pears and the supernatural capabilities of the proprietary microkernel. No wonder that the presence of Android "under the hood" of the first versions of the system was received very coolly. Even an easter egg from Android Q was left, which caused dismay. Is Huawei making us a bubble?

Not. It's not about what's underneath, but about the cover. We have to think about HarmonyOS in slightly different categories. It is a system that supports a variety of kernels, including Linux variants (including Android), Harmony, and Lightweight kernel. The choice of the kernel, of course, depends on the capabilities of the hardware, and that's why Huawei has prepared four HarmonyOS distributions, matched to the amount of available memory on the device. HarmonyOS does not fit the definition of the operating system as a whole, from the kernel to the user interface. I will not complain about it, because the unconventional approach opens up a lot of new opportunities for users.

The HarmonyOS laboratory is an elegant apartment

In Poland, you can already buy watches and tablets from HarmonyOS, but this is only a drop in the ocean of the target range. I have already seen something at the Huawei headquarters. The laboratory in part of the Warsaw office resembles a more modern studio - there is a corner with household appliances, a sofa and a TV set, and a small office. And it is already clear: HarmonyOS is not an Android competitor for phones. It is a universal software for working with hardware of any category - from a thermometer to a car - with its own communication bus, task scheduling, distributed data exchange and resource virtualization.

And so HarmonyOS sometimes "underneath" has a proprietary microkernel, sometimes an Android kernel. In theory, HarmonyOS could also have a desktop Linux underneath and compete with Chromebooks, but Huawei has no plans to do anything like that. Huawei laptops will be sold with Windows and the already known program for exchanging data with the rest of the ecosystem. At least for now.

The HarmonyOS interface on the phone looks familiar, because we are finally dealing with an Android modification. Huawei chose two main colors for the entire HarmonyOS interface from the Pantone palette. These are Cosmic Blue and Snow Gray, and aside from that, we'll see a lot of white in all applications and system settings. It is also worth paying attention to the gravitational effect when touching interface elements. This is an animation that indicates that the interface responds to user commands. Huawei also boasts a nice font. I spent only a few minutes with the phone with HarmonyOS, also in the test version, but the first impression was very good. I have been using the MatePad 11 tablet for a longer time, the review of which will be published soon. 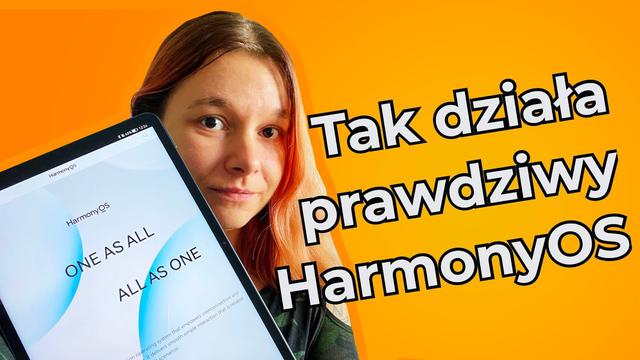 HarmonyOS allows you to create a superdevice - the command center of a group of devices. What's more, the phone does not have to be that super device. Do you remember Power Rangers? Everyone had a mechanical animal at their disposal, and these animals, in various combinations, made up the fighting machines. It's the same here. Superuration is almost any combination of equipment /

But suppose you have a phone or tablet at the center of a group of devices. You can control the oven, play music and play on the TV in one place. Everything works seamlessly, and Huawei has designed a great interface with buttons to connect devices together. Just drag the headphone button from the phone button to the TV button to switch from one device to another. No fumbling in the settings, one gesture and it's ready.

All devices in the home will be assigned to one Huawei ID. What about other household members? In the near future, Huawei will introduce the possibility of combining Huawei ID accounts from one household into a "family". Then it will be better to share electronics and household appliances in one network. Huawei is also working on transferring notifications between devices to appropriate users and the possibility of sharing some devices with guests. So you will be able to listen to music together (provided that everyone present has Huawei phones), but only the household will have access to a vacuum cleaner.

We will also be able to play together on the TV, and the phones will be controllers (communication is a Wi-Fi and Bluetooth connection). At the same time, players will not have to install anything on their phones. They'll sit down and play! This is the magic of the HarmonyOS distributed ecosystem. There will immediately be a virtual pool of resources that can be used by all connected devices. No device setup, no controller pairing, no frustration.

It was just as easy to launch another scenario: streaming the image from the sports camera, to the phone camera, and on top of that, the sports watch indications. The result is a camera, phone and watch super device, ideal for sports broadcasts. It took maybe a minute to get everything set up. I am waiting for a stream editing program that will beat it.

Huawei Connect's ability to transfer files from phone to laptop is suddenly no longer revolutionary. Anyway, I could see the new version of the Huawei Connect application, which allows you to connect the tablet with harmonyOS as an external computer screen. Paired with the M Pencil, it's a great work and creation tool. And that's good - Apple cannot have a monopoly on such a cool feature.

It was known from the beginning that HarmonyOS would work slightly differently on the Chinese and European markets. Much depends on the differences in service availability and cooperation with local partners. In Poland, we still do not have access to, for example, Huawei Pay (work is ongoing). For cultural reasons, we also use kitchen appliances other than those in China.

An example of such a function is the voice control. In China, you can control HarmonyOS devices with the Huawei voice assistant. This works great and the command can be given, for example, to a Huawei smartwatch with a microphone. There is only one problem for now: you have to speak Chinese. When we see more HarmonyOS devices in Poland, it is not known yet. Huawei does not yet have a deployment calendar.

Tags: harmonyoshuaweiharmonyos 2.0harmonyos is androidhuawei z harmonyos Table of Contents View comments X Scroll down to the next entry