I extended the RAM memory on the Realme 8i phone and ... I didn't notice any difference
Virtual frame memory in smartphones is a fake?

Mass memory of the smartphone as an additional frame.Does it actually work?

In 2020, a new trend was born on the smartphone market.In the settings of many new and updated phones, an option has appeared to expand the RAM operational memory.Similar solutions are used by companies such as Xiaomi, Oppo, Vivo, Realme and Samsung.

I just have a Realme 8i phone on hand, in which the RAM expansion function is available.The manufacturer describes it like this:

The test phone still has almost 100 GB, so the conditions imposed by the manufacturer meets.So does adding virtual memory change anything?Well…

I extended the RAM memory on the Realme 8i phone and ... I didn't notice any difference

I conducted a simple test.I selected 12 games and applications that I launched one by one.Then I turned each of them again. 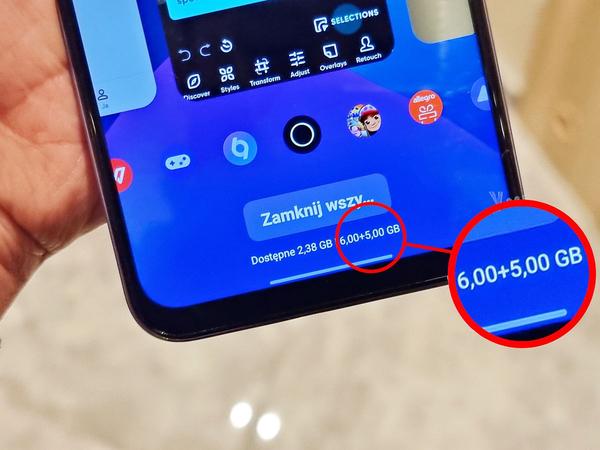 Of course, the recording of the screen absorbs some resources;Without this, the phone works a bit faster.However, registration was included in both modes, so the results are comparable.In the 6 + 5 GB RAM configuration, the smartphone should work noticeably faster and does not work.

I have conducted the test over 10 times.I changed the order of the application, tried to run them with the recording turned off, but it did nothing.Each time an additional 5 GB of virtual RAM did not bring any noticeable improvement.

Virtual frame memory in smartphones is a fake?

Well, in this particular smartphone, a separate mass memory does not compensate for less RAM.So if someone has two variants of the same phone to choose from, I would rather not choose the weaker with the attitude that you can add RAM in the settings and will come out.

Perhaps there is some use scenario in which the virtual RAM memory gives anything, but despite numerous attempts I could not find it.I specially added several system applications to the set.Even if they only went to a separate memory, there would be more physical RAM for other apps, so the smartphone should work better anyway.

The topic is interesting, so soon I will definitely check the operation of the function of expanding the memory on smartphones of other brands.